The amount of net income required to cover the cost of renting has increased 16.8% in the last two decades to 45.5% nationally – now accounting for 74.8% of the average salary in London.

That is according to the latest research by sales and lettings agent Benham and Reeves, which found that the average rent accounted for 28.7% of the average income in England 20 years ago.

Two decades ago, the East Midlands was home to the lowest income to rent ratio, with 24% of earnings required for the average rent. Today, the North East boasts the most favourable ratio at 32% and has also witnessed the smallest increase in the last 20 years (7.4%).

Marc von Grundherr, director of Benham and Reeves, comments: “There’s been plenty of positive changes to the rental market in the last 20 years with better codes of practice and improvements through technology allowing for a fairer, more transparent process for both landlords and tenants.  Unfortunately, the one thing this can’t address is the huge demand for rental properties and
the resulting increase in the cost of renting as a result and with wage growth failing to keep pace, the proportion of our earnings required to cover rent has spiked notably since the turn of the millennium.”

The table below shows the largest increase across the UK over the last two decades: 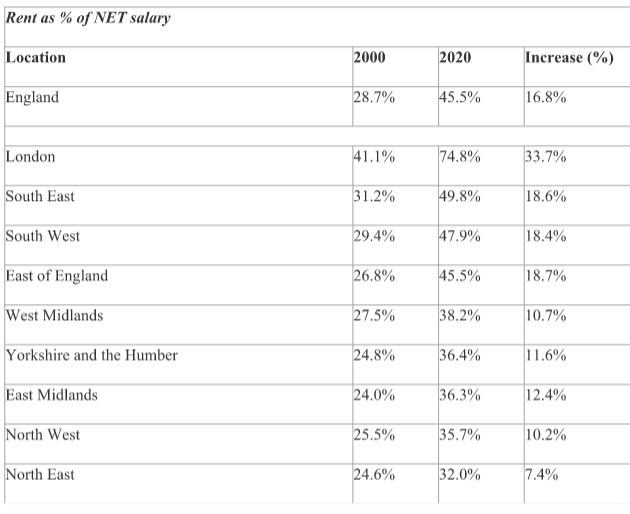